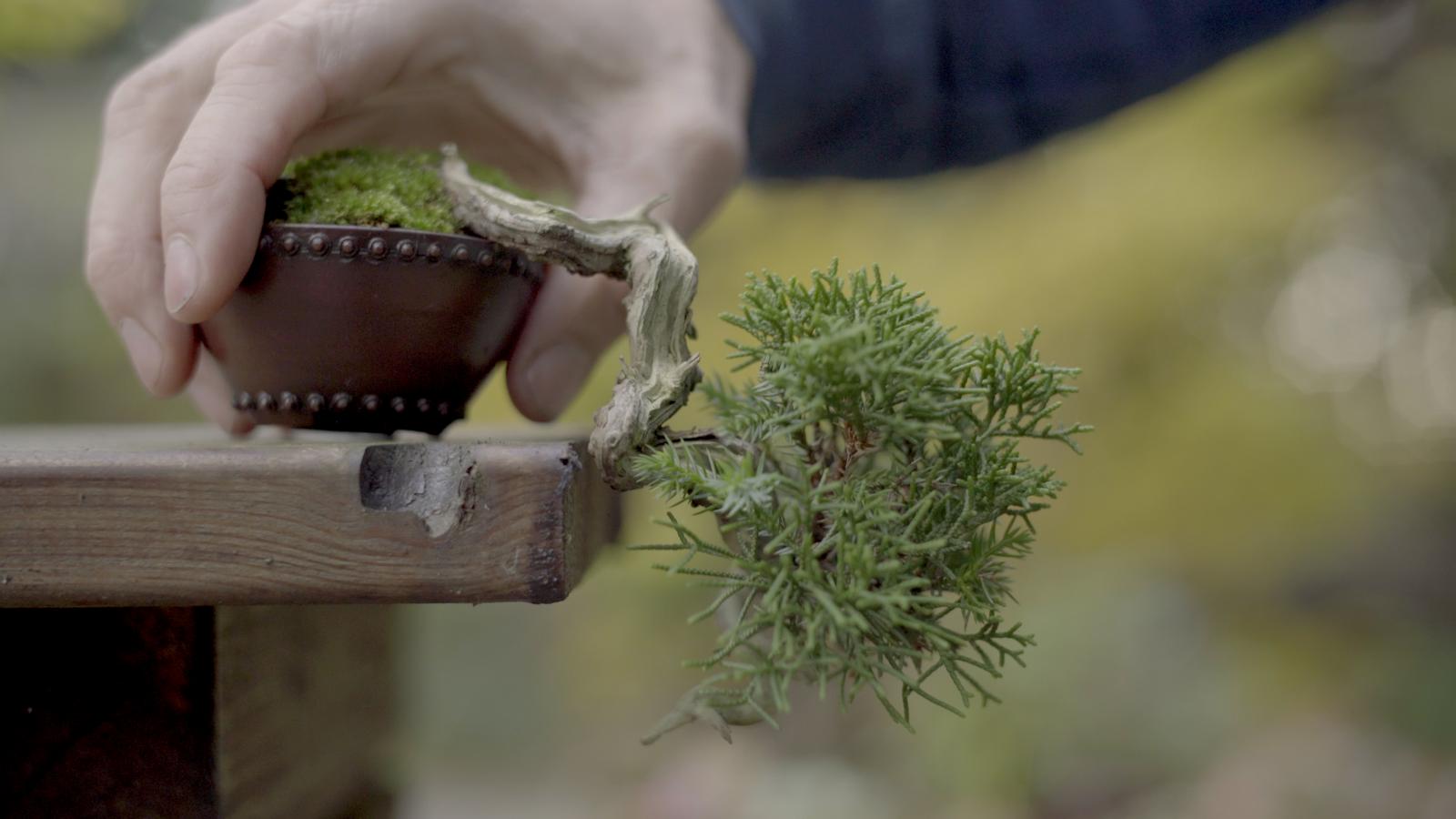 In 2005 I was in Japan with two good friends, exploring bonsai. We talked and interviewed great bonsai personalities and one of them was Saburo Kato at Mansei-en in Omiya bonsai village.

Mansei-en is an old family bonsai nursery, and at the time when Saburo Kato was around there was a good number of smaller bonsai in the shohin category. Overall a big variation of trees, and a very relaxed atmosphere.

We had a great meeting with Kato-san who postponed his vacation so he could see us. A great gesture from a great man. One of a few it is fair to call a master.

The reason for this introduction, is that i had to have something from Kato’s nursery. In order to remember this meeting.

I found a small Shimpaku Juniper. A variety we have discussed at our meeting. A perfect memory and a tree that expresses the spirit of Saburo Kato. Strength shown by the curved trunk, age shown by deadwood, and gentleness shown by the soft canopy.

The small Mame-bonsai has changed its design through time, but the memory and spirit is the same.

The Juniper as purchased. Still looking a little raw and not refined yet.

It shows great strength through the growth, and that is important when buying bonsai material. Newer go with a weak tree, because it is not to know what state it is in, and what might cause a weak condition.

This one was strong though, and I could see a good future for it.

Back home with the goodies.

It is time to evaluate the tree. A great thing with small trees like shohin and mame, is that you can sit with the tree in your hands and view it from every possible angle with ease.

Clearly something has to happen. Notice the lower branch at the picture (right). This branch is a sacrifice branch left to grow too long with the purpose to grow some thickness to the trunk. The small tree has been in a larger container earlier to speed up growth, and this is not the only branch that have been used for trunk thickening by free growth. The jinned (deadwood) part of the tree also shows rests of a larger branch that have been cut off after it deserved its purpose of growing a thicker and stronger trunk. Therefore the phrase, sacrifice branches, because they are meant to be removed after they have done their job.

It was necessary to remove some of the heavy foliage, because it was my meaning to let the tree stay in the size it had.

Using a concave cutter to take off the overgrown foliage. You can use other tools as well, because Junipers do not heal over wounds like many softwood specimens do.

Instead they have a habit of withdrawing the callus a bit when they heal up, and that has to be taken into consideration when the design is planned.

Foliage is now reduced for the first time, and new foliage pads should develop from here in future.

The climate in Northern Europe is cooler than the Japanese, and therefore it will take a longer time to regrow foliage here.

The benefit of this is that it also is possible to keep a bonsai in the same shape for a longer period before it outgrows it and needs to be reshaped.

The Shimpaku Juniper has shorter, denser and a little more stiff needle growth than the common Chinese Juniper. It can be more compact formed and this is a great feature for small bonsai especially.

The original deadwood. Not worked on very much at that time, so it was something that could be improved.

Notice how the callus (wounds) had healed nicely along the cut where the living tissue has been removed earlier.

Now on to the care of foliage pads.

It is important not to pinch regularly. If you do so the tree will be stressed. I stead a scissor is used to cut of extensive growth at the base or at a point where it divides.

Pinching soft needles at the tips is only something that is done for fine trimming minor parts up to an exhibition. It will after a few days cause some brown spots at the ends too, that doesnt look good.

Wiring Junipers is fairly easy and they do react well to this. At small and thin branches wire should be applied a little loose (the opposite of very tight) so the fine twigs are not damaged.

A year later it was time to look at the roots. As it is obvious the Juniper was in need of a repotting.

Healthy roots began to push soil out of the pot, and was in need of a reduction and trimming too.

Like branches, roots should be trimmed now and then to ensure new growth replacing old.

Roots are cleared and extensive roots cut back.

It is a delicate balance to ensure the health of roots in a very small pot.

A year later it was time to look at the deadwood. The shari (deadwood part of the trunk) need to be changed from the smooth polished look to a more aged rough expression.

With manual sharp carving tools i gently lift some of the dead wood, and peal it back, so it makes a more natural weathered impression.

using powertools at such a small tree makes no sense, because the machine will just remove wood without leaving back fine fissures and small bits from branches.

Junipers have a wood structure where it is possible to work with hand tools instead of machines. In opposition to the Yew that has very hard wood, and cannot be worked without machines.

After the tissue is lifted and split with a sharp carving tool, it is pealed back with a jin plier.

This makes a natural appearance afterwards when the wood over time dries out. Time is also a factor in the work with deadwood. Sun and rain will help aging the wood so it gets a better natural look with the years to come.

so it doesn’t rot. This is done with a bleaching fluid called Lime Sulphur.

It has the advantage that it preserves the deadwood, and also gives

it an aged appearance.

A new pot of high quality has been chosen, although the tree is not a bonsai yet but in the development stages. This is what happens sometimes. You get eager to see the tree in that great pot, and cant wait for the tree to mature.

Newermind. The pot (Japanese from Bigei – Yokoname), will benefit from the aging in the environment outside, so it will not be wasted unless it breaks  by accident.

At this time the tree is still in pretty much the same position as it original was when acquired in Japan.

The tree has been developed and cut back a couple of times to stay in the small Mame bonsai size (below 10 cm).

Still in upright position, but I have been thinking – a lot – about changing this, and finally I took a decision. And the right one in my opinion.

A cascade style seems much more natural to this type of trunk. Its twists underlines the natural movement. The base is not fat as on larger upright trees, and therefore it makes good sense that the tree lies down like hanging on a cliff.