For a number of years I have been growing a small Juniperus Shimpaku, and followed the original position until now. The tree was purchased as a semi-finished piece at the Mansei-en nursery in Omiya, Japan, of late Saburo Kato in 2005, and mainly bought as a memory of the time spent with this most respected bonsai artist. One of a few I could afford.

I named the tree “Kato” for the very same reason. To remember a personality and respected artist who as one of a few, deserved to be entitled master. A misused phrase put on too many people nowadays who still needs to deserve this predicate after proving years of dedicated high quality work.

Back to the tree. After a few years of training, a tree in this size usually needs some restoration, some work that brings it back in shape. I originally had to reduce the slightly overgrown canopy after the purchase, and after that I managed to keep it in it`s form for some time. The shari (trunk deadwood) was only worked on sparsely, and I enhanced the deadwood some years ago to add some interest to it. I also extended it a little to make it better.

Time gone, and the tree needed to be reduced a little again in 2017. New growth was developed further back, so I now had the opportunity to reduce the length and keep the size limited. This made me think of a new possible style of the tree. A simple change with a huge effect, with little effort done.

Where growth was removed new jins (deadwood branches) have been created, and this opened for a new vision of the tree. Same pot, but new position changes the view and expression of the tree. Only rearranging the left part of some roots was necessary. I was able to tilt the tree, so it performs much better now to my taste.

The repotting was done carefully, not disturbing the roots much. The new inclining position also lifted some older roots to the surface, that in future will be a good visual nebari adding strength to the image when the soil carefully is removed little by little over time.

Mind the gap. When positioning a cascade or semi-cascade bonsai it is of great importance to leave air between the trunk and the pot. A convincing cascade bonsai shows it`s strength only if it is able to hold it self and not supporting it by resting at the edge of the pot. Keeping air between the pot and trunk is therefore an important detail.

2008. The canopy beginning to fill in nicely again, and in proper size.

2005. Original bonsai after purchase at Mansei-en.

2005. The original shari before it was reworked.

2005. Working the deadwood to bring in more age and interest.

2007. The canopy reduced and jins made at the end.

2017. Before changing the position.

Using this method of applying the wire, takes less space at the soil surface, when the wire is fastened beneath the pot in stead of at soil level.

Trying out the new position.

Time to pull the wire so the tree is fastened securely in the pot.

Here it is visible how little the wire is seen at soil level. Afterwards easy to cover with moss.

0 thoughts on “Shimpaku upside down” 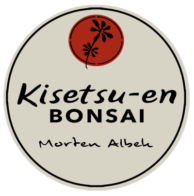